The Worst Sticker Fail ever ! 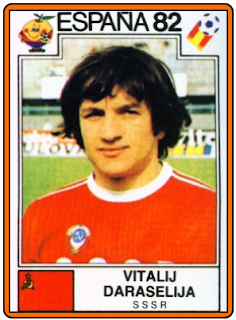 Vitaly DARASELIA was a legend of Soviet Union national team in the top 80's. Born to a Georgian father and Abkhaz mother, Daraselia played for the great FC Dinamo Tbilisi which won the 1981 UEFA Cup Winners' Cup. In this final versus the FC Carl Zeiss Jena (Ex-DDR) Vitaly DARASELIA scored the winning goal, rushing into the penalty area past two defenders, just 3 minutes before the full time whistle. DARASELIA he's one of the best player in USSR at this time and may be one of the greatest in Georgian football history. Of course he's a starter in the Soviet Union national team before and during the 1982 World Cup in Spain. He played four games as a starter during this world cup. So it's logical if he's got his sticker in the Official Panini Album as you can see on the left. But the worst fail ever in a World Cup sticker album it's just below. In this scottish album for the 1986 World Cup Album we can see this sticker of Vitaly DARASELIA and it's an outsanding story. 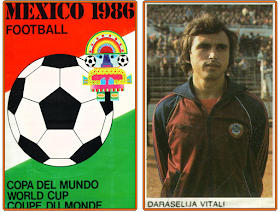 For me this 1986 DARASELIA's sticker is the worst fail ever in a sticker album for the only reason than Vitaly DARASELIA died in a car crash in 1982 !! After the 1982 world cup, and at the peak of his footballing prowess, Vitaly DARASELIA was killed in a car crash. He is survived by his son Vitaly Daraselia Jr,  also a professional footballer. 4 years later it's a shame to produced this huge mistake. The greatest goal in video of Daraselia's career in the 1981 UEFA Cup Winners' Cup final :